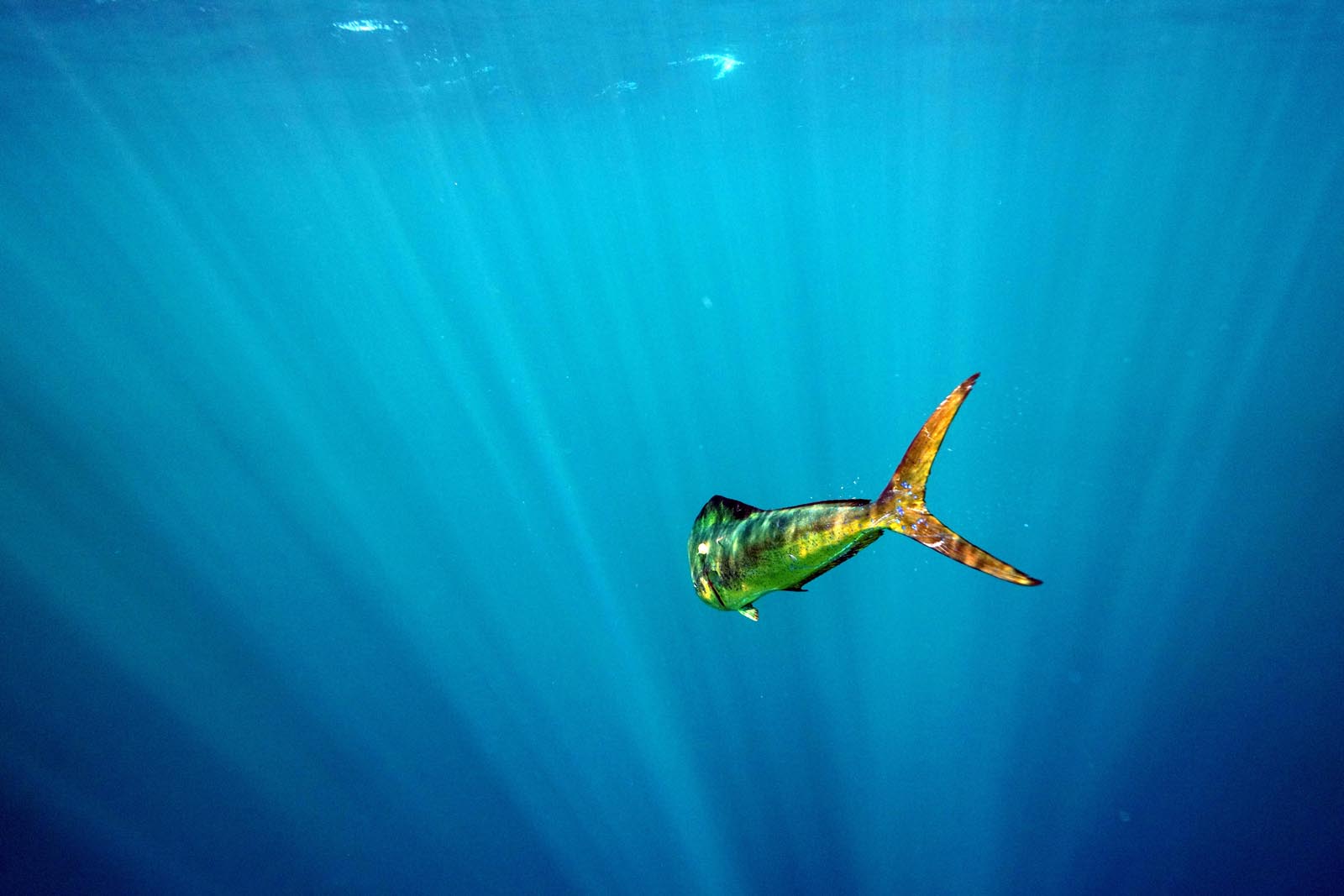 Last November marked the third field expedition for the Dolphinfish Research Program to Tropic Star Lodge to determine the horizontal and vertical movements of dolphinfish in the Eastern Tropical Pacific Ocean (ETP).  This field expedition and research is funded by the Guy Harvey Ocean Foundation.  During the most recent expedition, a total of 12 satellite tags were deployed, and we have received data from 9 so far with 2 more scheduled to report in May.  Since 2018, we have deployed 20 satellite tags on dolphinfish ranging in size from 36″ to 56″ fork-length.  When combined with TSL’s conventional tagging participation, which has amounted in the tag and release of 572 dolphinfish, of which 20 have been recaptured,  a preliminary dataset is taking shape that shows both fine scale and broad movements, habitat use, and fishery dynamics in this part of ETP.  Detailed updates on the progress of our research and program expansion in the ETP are available on this webpage.  A special thanks goes out to the entire TSL staff as well as the captains and mates for their help in making this effort possible!

A special thanks goes out to the Sustainable Fisheries Partnership (SFP), MARTEC in Costa Rica, Instituto Publico de Investigacion de Acuicultura y Pesca Ecuador, Instituto del Mar del Peru, and the Comite Regional de Productores y Procesadores de Mahi for providing support for our tagging program to expand to Ecuador this past month.  We provided 1000 tags in 40 kits to the Sustainable Fisheries Partnership to distribute to anglers in Ecuador and Peru.  We are also pleased to report that we deployed two mark-report popup archival satellite tags (mrPAT) tags on a 47″ female and 48″ male during our tagging work.  These deployments mark the first time dolphinfish have been tagged and released with satellite tags in Ecuadorian waters.  Click here, or the image below, to learn more.

A special thanks goes out to the Sustainable Fisheries Partnership (SFP) and MARTEC in Costa Rica for providing the funds for our tagging program to expand our tagging operations to Quepos, Costa Rica, this past month.  We distributed over 400 tags to local charter and recreational anglers based out of Marina Pez Vela and we are happy to report that the tags are starting to be put to good use.  Check out our video report (click here) which documents our recent trip down to Quepos, CR, to initiate this work.

Between the Western Central Atlantic Ocean (WCA), where our tagging program has been active since 2002, and the Eastern Pacific Ocean (EPO), where our program expanded with funding provided by the Guy Harvey Ocean Foundation three years ago, there are stark contrasts in oceanography, environmental variability, and pelagic habitat.  Last year, with field work based out of Tropic Star Lodge, we began to investigate how adult male and female dolphinfish vertical movement patterns off Panama compare to data collected on dolphinfish in the WCA since 2005. Many factors, including the productivity of surface waters, patterns of upwelling, the presence and absence of shallow oxygen minimum layers and differences in temperature, ocean currents, and the existence of holopelagic algae may influence differences in how adult dolphinfish behave between these two oceans.  All are observations that have never been concurrently documented for this species. Important to better describing the ecological niche that dolphinfish occupy and how vertical movement constraints or strategies could expose fish to differing rates of fishing mortality between these oceans, results can aid fishery managers in better predicting how dolphinfish may be exposed to different fishing gear types based on the prevailing oceanographic and environmental conditions. Using a thread-through satellite tag method, we acquired a 26-day and 30-day (full interval) record for a 39″ bull and 45″ cow, respectively, last November. The fish were caught aboard Miss Puerto Rico and Miss South Africa. They were tagged and released on two consecutive days during last year’s tagging trip approximately 20 miles west-southwest of TSL. While this work is certainly exciting on the water (see highlights from last November’s tagging trip in the video below), data analysis

and advancing scientific knowledge of this species to conserve it for generations to come is our driving force. Upon initial comparison of maximum depth per dive for both fish, habitat use appeared limited in scale. The vast majority of all dives were between 20% and 40% of the maximum depth visited for both fish (96.8 and 125.1 meters) and the female exhibited a less structured diving pattern than the male, which repeatedly and more frequently dove to intermediate depths (30-60 meters).  When compared to records from the WCA, these fish neither expanded their diving behaviors within the vicinity of their maximum dive depths nor engaged in ritualized, more repetitive, diving behaviors during crepuscular and night-time periods. The female, however, did exude some similarities with less deep-diving behavior in the late afternoon followed by increased dive activity during dusk. A special thanks to Collin Glaser, a student at Roger Williams University, for processing tag 175818 as part of his internship with the Beyond Our Shores Foundation this past semester.

In November 2018, the Beyond Our Shores Foundation (BOSF) began work to expand the Dolphinfish Research Program (DRP) to the Tropic Star Lodge

and is funded in part by the Guy Harvey Ocean Foundation (GHOF).  Through mid-March 2020, a total of 500 dolphin have been tagged and released by 21 vessels and approximately 154 anglers.  This effort has led to the recovery of 14 dolphinfish in the Eastern Pacific Ocean (EPO) and the deployment of eight pop-up satellite archival transmitters.  We recently received three recaptures reported by Captain Fernando Brias of Dios Primero, an artisanal fishermen based out of San Miguel Bay, that provided the first evidence of annual residents in Panama.  In a recent longline set, three fish had tags, and of those, two were fish that were tagged and released by Miss Puerto Rico and Miss England off Piñas Bay, Panama, in January 2019.

While we do not know whether these fish remained in Panamanian waters for their entire time at liberty (resident substock?), these events could be the first evidence of annual return migrants to the region.  The question then becomes, where did they go?  Of the other conventional recoveries obtained, four were fish that were recaptured west-northwest of Panama.  As for satellite tag deployments, recent movements showed west-southwest to nearly southerly dispersals into Columbian waters.  After only 15 months of research funded by the Guy Harvey Ocean Foundation, we are beginning to acquire fascinating examples of the movements and life history patterns of dolphinfish in the EPO.  Stay tuned for our next update that will examine the vertical movement strategy of the bull and cow that moved south into Columbian waters.

It has been a year since the Dolphinfish Research Program expanded to the Tropic Star Lodge located in Pinas Bay, Panama. Recently, with support from the Guy Harvey Ocean Foundation and the Guy Harvey Research Institute, we embarked on our second research expedition to continue working with the Captains, mates, and visiting anglers at TSL to implement a robust tagging program in their waters. Below are some updates regarding our progress to date.

A total of 9 vessels at TSL have had fish recaptured or helped with a PSAT deployment.

For a species as important as dolphin to so many fishing sectors in the Atlantic Ocean, one would think that we would know the status of the health of the population in the region.  Unfortunately, neither the National Oceanic and Atmospheric Administration (NOAA) nor any of the international fisheries management agencies in the Atlantic (e.g., International Commission for the Conservation of Atlantic Tunas (ICCAT) or Caribbean Regional Fisheries Mechanism (CRFM)) have made it a priority to conduct a modern stock assessment on the species.  The only modern stock assessment on dolphin was conducted by the Inter-American Tropical Tuna Commission (IATTC) which we reported about in our May 2018 newsletter.  Tropic Star Lodge (TSL).  This research is one component of GHOF’s

Eastern Tropical Pacific Seascape (ETPS) project which is a partnership between GHOF, the Guy Harvey Research Institute, Nova Southeastern University and TSL.  The objective of the ETPS project is to tag and collect migratory data from 3 species of billfish (sailfish, blue and black marlin) in the Pacific Ocean in order to shed light on the differences between the habitat use of the 3 species.  In addition, the project aims to collect migratory data on sharks, rooster fish, and dolphinfish.  In terms of dolphinfish and our involvement in the ETPS project, through the end of August 2019, a total of 381 dolphin have been tagged and released, of which 9 have been recovered.  Our most recent recovery reported by Pablo Luis Suarez and Gastelum Zuñiga Mario Francisco (Figure 1 – above) shows that large individuals of the purported resident coastal sub-stock in Panama can mix with the oceanic sub-stock in the high seas.  This is the first quantified evidence of these dynamics.  Mr. Suarez and Mr. Francisco caught the fish aboard a Venezuelan flagged purse seiner M/N Taurus-1 while fishing in the high seas of the EPO.  M/N Taurus-1 was targeting tuna when the dolphin was caught.  In addition to acknowledging Mr. Suarez and Mr. Francisco for reporting the recovery, we would like to thank IATTC and Marlon Roman in particular for sending us the tag that was recovered on the fish.  We would also like to congratulate Captain Mosquera of Miss Skandia of the Tropic Star Lodge for tagging and releasing this bull in January 2019.  For more information on other movements recorded to date (Figure – article below) offshore TSL, in the Gulf of Panama, or along the continental shelf break from northwestern Panama to Costa Rica, click here to read a brief but detailed article.  To help the DRP send kits to anglers from southern California to Manta, Ecuador, and to expand throughout the eastern tropical Pacific Ocean consider making a donation today.  Click here to donate to DRP expansion in the Pacific.

Expansion to the Tropic Star Lodge –

offshore and inshore fishermen for more than 50 years and is very active in fisheries conservation work.  The Tropic Star Lodge was not only the first fishing resort in Panama to begin releasing all roosterfish and cubera snapper but it also adopted the use of circle hooks in the early 90s to improve the survival rates of released fish. Tropic Star Lodge, along with many leaders in Panama, have been responsible for establishing a 20-mile non-commercial fishing zone around Piñas Bay and also a decree that protects all billfish and roosterfish from commercial harvest.    Click here to read a document prepared by Panama’s Authority in Aquatic Resources.  Many of the topics discussed and progress explained in that document are the result of years of work with many different entities including the Tropic Star Lodge.

The tremendous conservation efforts outlined in the document above are fantastic achievements for Panama and we are pleased to announce that through the support of the Tropic Star Lodge, Guy Harvey Research Institute at NOVA Southeastern University, Guy Harvey Ocean Foundation, and captains, mates, local and visiting fishermen in Panama, the Dolphinfish Research Program successfully expanded to southwest Panama during the 2018 Tropic Star Billfish Tournament.  We outfitted the lodge’s fleet of Bertrams, along with 4 private boats, with more than 1100 conventional tags and we began our satellite tracking and fishing fleet work.   We are extremely excited to get the Tropic Star Lodge involved in the Dolphinfish Research Program to help advance ocean conservation and our knowledge of the life history, movements, population dynamics of dolphinfish in Panama.