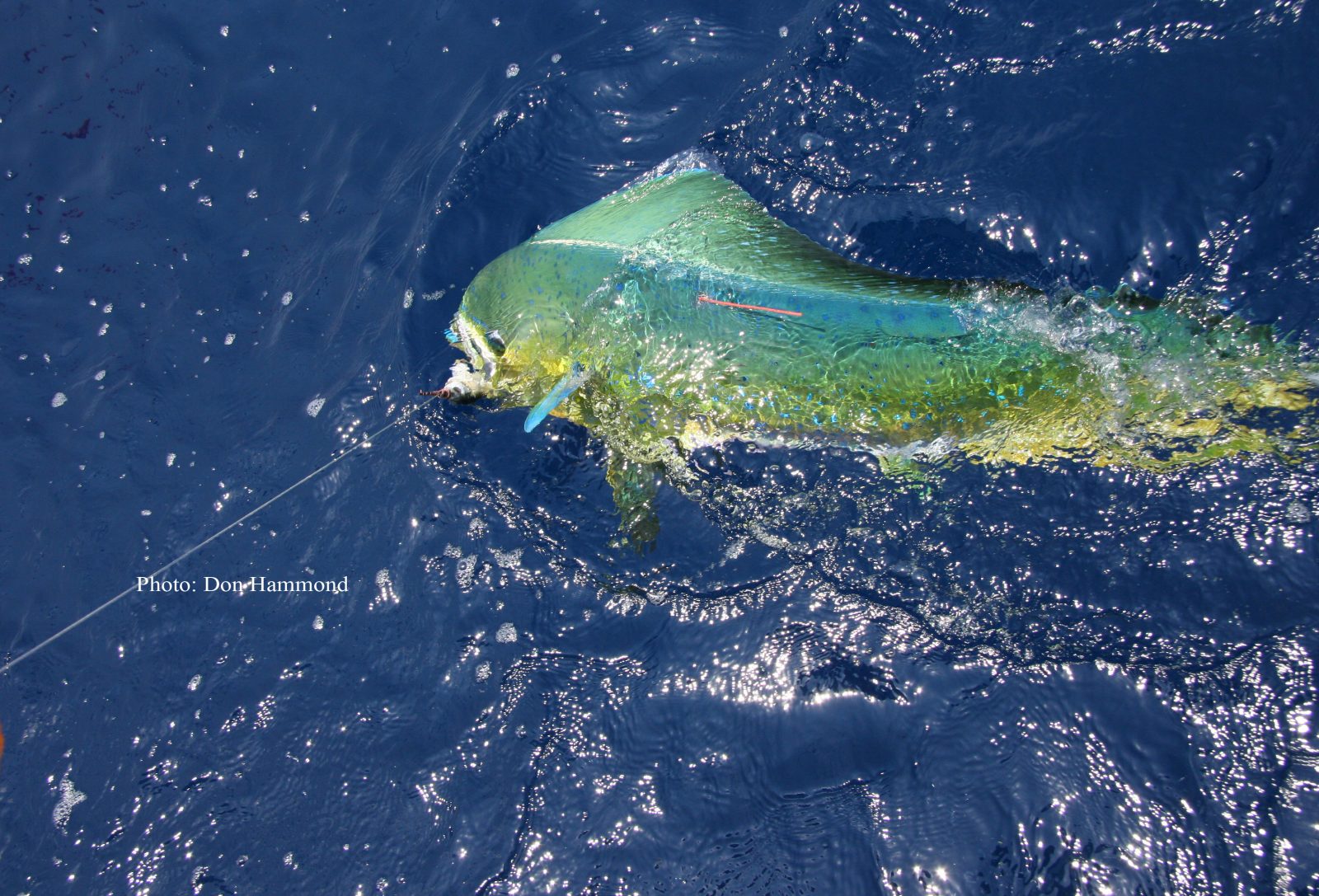 Every dolphinfish tag deployment and reported recapture adds another data point and observation about the occurrence and movement of this iconic species throughout our oceans.  At the end of September, Captain Roy Canada reported a Killin Time II-tagged fish (tagged by Rich Benton) just north of Spanish Cay in the Bahamas.  Captain Canada reported that the dolphin he was catching aboard MC2 were showing back up despite cooling water temperatures.  A few days later, angler Timothy Ward, while fishing aboard Semana Fishing Charters, recaptured a fish tagged by Captain Charlene Brown and angler Eddie Maybury aboard Keeper.  A week later, another recovery occurred aboard Good Hit Sportfishing, but this time it was reported by angler Jeff Jerzy while fishing only seven miles north of Tim Ward off Ft. Lauderdale.  Jerzy’s fish was tagged by angler Michelle Curtis off Big Pine Key while fishing aboard Killin Time II on June 15th, 2020, the day before Captain Brown tagged and released their fish off Marathon, Florida, that was recovered by Ward.  The common thread that links these recovery events together is that their tag, recovery, and growth attributes are similar to 15 other documented examples of what the Dolphinfish Research Program (DRP) has come to describe as Florida’s semi-annual fall dolphin migration. Each of these recent dolphin recoveries (yellow stars in the image above) ranged from 107 to 115 days at large.  In addition, each fish was tagged and released between June 12th and June 16th off the Lower Keys.  Most importantly, each recovery further highlights the value of releasing small fish in early summer that can return through Florida’s waters in just over three months during fall after packing on six to ten additional pounds!  This is what we are referring to as Florida’s semi-annual fall dolphin migration – the re-appearance of the same dolphin in Florida state waters after 3 to 5 months at liberty.  While there are numerous scenarios in which these fish may have moved between tag and recovery sites, surface drifters (colored paths in image above) provide routes that can be realistically compared until more recoveries and/or dozens of geolocation tracks are acquired.

For example, after downloading all of the drifters active from mid-June until October, the time at which the fish being discussed were at liberty, the drifter that was deployed north of Cuba (ID 4101630) moved northeast, only to meander around Cay Sal Bank for a few days, before taking a quick northerly path until the vicinity of the Charleston Bump, where it moved northeast toward the Outer Banks only to meander south toward the Abacos in the Bahamas.  The total time between deployment and beaching on the Abacos was 45 days, which was more than two times faster than the movements being discussed.  However, the path taken by 4101630 shows particular locations where dolphin can meander or be drawn to move given the overall drift of floating objects (and bait).  We have observed several fish over the past few years meander off the Lower Keys (tagged by Killin’ Time II and the Scouts at Summerland Key) where fish moved west toward Key West or were recovered within the Keys up to 19 days after being tagged and released in June (click here for that report).  Add to that, observations of movements into the Northwest Providence Channel as well as surface drifter paths that show clear recirculation patterns to the northeastern Bahamian escarpment (Antilles Current), and we think these observations as well as the previous 18 similar recoveries indicate that dolphin can depart Florida’s waters in early to mid-summer only to return within three to five months during fall after moving through some portion of the Bahamas.  The average growth and days at large for the 21 examples that have led to the description of this movement type is 14.4” and 126.5 days, respectively.  Below left are examples of long-term recirculation patterns (6-12 months) for both dolphin (observed recoveries) and surface drifter paths.

Over the course of the 16 years of the DRP, 42 of 633 recaptures, or 6.6% of the program’s dataset represent fish that were recovered on the same coast where they were released in a year subsequent to when they were tagged.  The majority of these (57%) occurred during spring, with May having the most examples.  Therefore, now is the time when large (not just small) dolphin are running along the U.S. East Coast and the following examples represent clear evidence of this.  Below is a table that lists the dedicated anglers and captains who tagged and released small dolphin and took precious time to report the recoveries.  This list only includes recaptures examined in this article.  Upon release, these fish ranged from 14” to 22” and averaged 18.6”.  Growth ranged from 7” to 40” and averaged 19.7” for an average of 248 days at large.  These examples further highlight the benefit of this international tag and release program.  Each one shows a small peanut dolphin being tagged along the U.S. East Coast only to return several months to a year later as gaffers, and most occur right around this time of the year.  Despite all of these return migrant recoveries, the maximum time at large for a return migrant recorded for the DRP is only 388 days.  During that time, the fish grew 24” and was landed as an approximately 20 pound fish.  When released that fish measured 14” and was likely 3 months old.  Add the release age with the time at large and we get only a 1.3 year-old fish, suggesting that true tackle testing and state record challenging fish in the South Atlantic Bight are those individuals that are likely making their 3rd or even 4th return trip up the U.S. East Coast.  Based on these data, we think that dolphin that weigh in at 70 to 80+ pounds along the U.S. East Coast are making their 3rd or 4th return migration through the Gulf Stream system and are likely greater than 3 years old.  Therefore, one of the most significant recoveries yet to be made for the DRP is a U.S East Coast return migrant at large for more than 550 days.  The ultimate would be a fish at large for 1460 days or 4 years.  Through this tagging program we can obtain those results to advance our knowledge of this amazing species and, along the way, we may find that the eldest dolphin, the century-mark beast, mayactually push closer toward 5 years of age.  Be sure to check out the image below to link to a slideshow at dolphintagging.com that provides a series of figures describing numerous return migrant examples

This page is being further developed by Beyond Our Shores, Inc.  Check back soon for more examples of general movement patterns of dolphin.  Click here to donate to the DRP through its official 501(c)(3), the Beyond Our Shores Foundation.