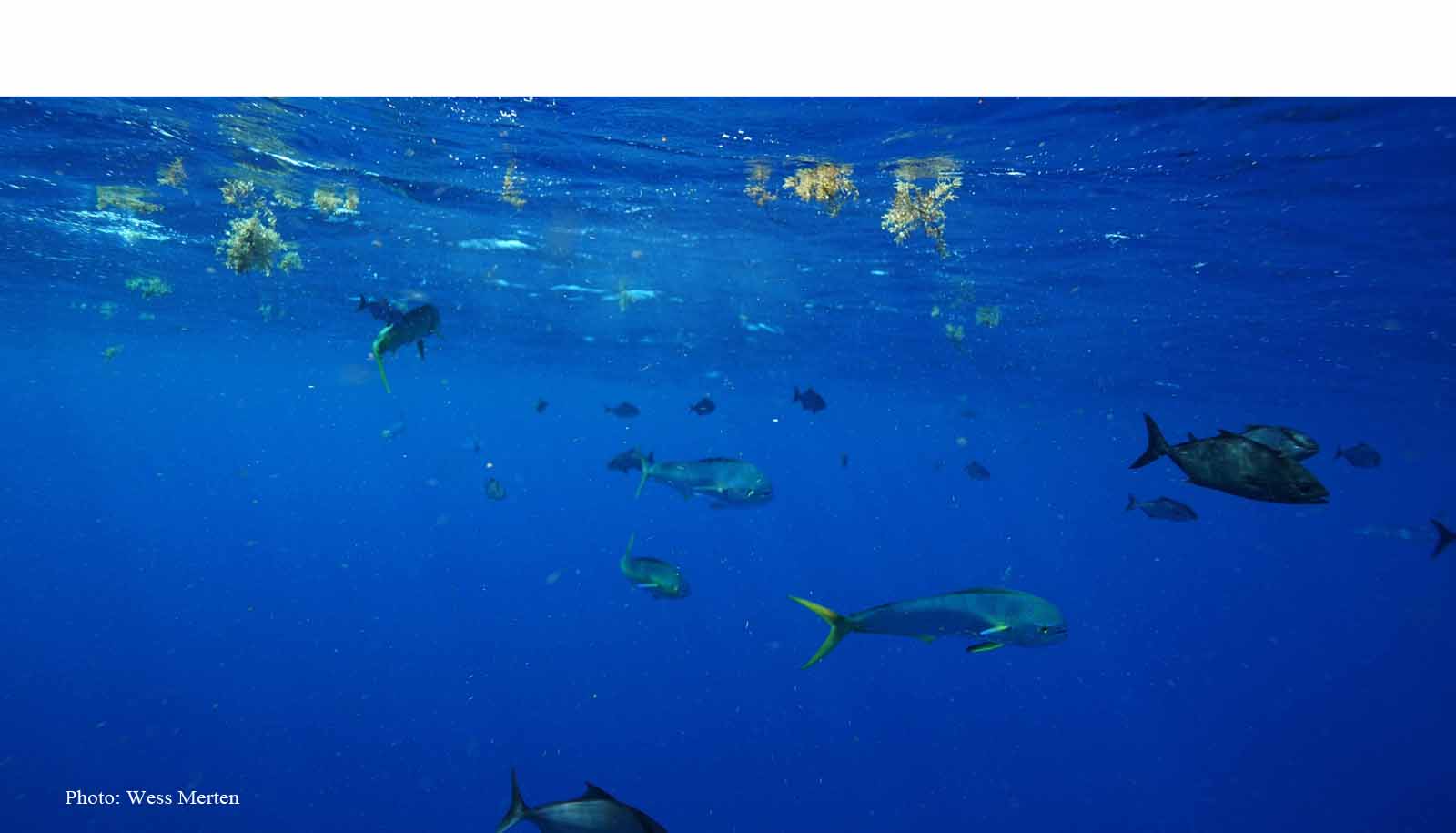 Life history of the common dolphinfish.

Catches of massive bull dolphin are exciting to report because, most often, they represent a state or tournament record, boat record, or angler record (click here for a table we maintain).  For most that fish offshore, acquiring a coveted record, such as largest dolphinfish, is nothing short of spectacular and only a few will have the opportunity to ink their name somewhere in a record book.  For scientific purposes, it is important to document landings of large individuals to examine seasonal, interannual, and decadal trends by location.  As part of our annual tradition, we are excited to share our list of the top five largest bullswe observed through social media in the Western Central Atlantic Ocean in 2020.  Weight is reported in pounds below.  Note that La Calankita’s fish is whole weight gutted, which points to the importance of gathering weight measurements of massive fish before they are processed.  Backlash’s fish established a new tournament record at the White Marlin Open and is the third 72+lb fish to be landed in Poor Man’s Canyon off Maryland in the past two fishing seasons.  Who knows, maybe in 2021, we will receive word that the long-standing world record, which still stands at 87 pounds, will be surpassed.  After all, that is only 12.5 more pounds than Wagner’s fish! Given that, last year, two anglers within 3 weeks of each other caught similar sized bulls in the same canyon, we might be documenting a new trend within the Mid-Atlantic Bight (MAB).  Further down the coast, Florida state waters produced at least one 70+lb fish in 2020 and several others in the 50+lb, range including the Slay family’s 58.90 lb fish caught off Cudjoe Key in the Lower Keys.  The latter represents one of the larger fish observed in the Keys over the last several years.

Moving over to the U.S. Caribbean Sea, Captain Colt Cook and angler Alex Zimmerman enjoyed catching a 63.7 lb beast just a few miles north of St. Croix in the Anegada Passage.  Less than two weeks before Hook N’ Cook caught its big bull, Captain Emmanuel Markham had a stellar day south of La Parguera, Puerto Rico, in late January and caught another massive fish that weighed 53 lbs after it was gutted.  In 2020, take note that the largest observed fish within the U.S. Caribbean Sea occurred during late January and early February, and only five months later, the largest fish occurred along the U.S. East Coast between June and August.  Last year, the top two largest fish were caught in the MAB between late July and mid-August, which is consistent with this year’s timing.  However, in early March of 2019, angler Dylan Louis caught a ~72 lb fish off Port Everglades, which was and remained as the largest for the year off Florida.  In 2019, we observed out of season catches of big bulls at FADs off the north coast of the USVIs and south coast of the Dominican Republic.  Congratulations to each of the vessels and anglers for catching these massive bulls in 2020.

The Mid-Atlantic Bight (MAB) makes up a massive part of the U.S. East Coast and, for offshore fishing, it consists of numerous offshore canyons that vary in size, distribution, and location from Norfolk Canyon in the south to Hydrographer Canyon (and others beyond) in the northeast.  This year, two record breaking dolphin were caught in Poor Man’s Canyon off Maryland, which set new state records for the Old Line State.  On August 16, 2019, Kristi Frashure of Pasadena caught a 74.5-pound bull while participating in the Poor Girls Fishing Tournament in Ocean City, MD.  She was fishing aboard Haulin N’ Ballin.  This brute was caught just 3 weeks after Jeff Wright of Cambridge, MA, caught a 72.8 pound fish to break a 34-year long standing record set by Kim Lawson in 1985.  Her fish weighed 67.5 pounds.  Even though Mr. Wright’s record only stood for 3 weeks, both occurrences raise a host of questions about the presence of these large fish in the same canyon in roughly the same time.  For example, were these fish traveling together? While bulls are known to be very aggressive in captivity if held simultaneously, can very large bulls like this co-occur in a large school of females?  The DRP has observed multiple males in schools while scuba diving but not 70-pound fish.  Even if they were not traveling or migrating together per se, did they originate in a similar location and make it to the MAB following a similar water body or influx of bait?  This occurrence, while possibly random in nature, seems too much of a coincidence to not think of other movement dynamics occurring.

When we consider other large bulls caught in the Atlantic in 2019, other patterns also emerge.  For example, angler Dylan Louis caught a ~72 pound fish on March 14th, 2019, off Port Everglades and was the only massive bull reported in Florida in 2019.  In addition, this might have been the only 70+ pound fish caught in Florida in the past few years,  which signals a series of questions regarding the size occurrence of dolphin in the Florida Straits over the past several years.  Where are all of Florida’s big fish?  The state record for Florida still stands at 81 pounds for a fish caught in 2007 by R. Vail.  Another interesting pattern to note are the large dolphin (numbers #4 and #5) caught at FADs in the Caribbean Sea.  Angler Chris Berry and angler Oscar Paredes caught huge bulls this past summer off St. Thomas, and south of Casa de Campo this past summer.  Lastly, Captain Kenny Midgett operator of Marlin Gull Sport Fishing Charters sent us some great reports this past season including a very nice bull caught on the North Carolina-Virginia border in 1000 fathoms in early May.  The end of April and early May is a time for U.S. East Coast return migrants and this nice bull, and report from Captain Midgett, provides supporting evidence to patterns we have observed through years of tagging data.  Click here to read an article on U.S. East Coast return migrants.

By Jennifer Betz and Wessley Merten

This massive dolphin to the right was caught out of the Tropic Star Lodge nearly 9 years ago.  The crew that caught this behemoth, including Mr. Tred Barta and Mr. Dennis Braid, estimated the fish to have weighed between 115 and 120 pounds before they filleted it and fired up the grill.  While we are excited this photo exists of this catch, unfortunately, the International Game Fish Association (IGFA) never received proper documentation of this fish, which would have been necessary to challenge the current all-tackle world record.  Had this fish been properly weighed, measured, and documented with IGFA it is likley it would have shattered the current 87-pound world record held by Mr. Manuel Salazar caught in Costa Rica in 1976.  We do wish this specimen was documented with IGFA, the world’s most widely recognized authority on the conservation of game fish and the promotion of responsible, ethical angling practices, through science, education, rule making, and record keeping.  We can only wonder how old this fish was.  With scales used for age determination, the maximum age of dolphinfish was estimated at four years for the Straits of Florida (n=511; Beardsley, 1967), three years off North Carolina (n=738, Rose and Hassler, 1968; n=339, Schwenke & Buckle, 2008), and three years in the Mediterranean Sea (n=150, Massutí et al., 1999).  The longest time at liberty for a recapture within the DRP is 557 days, which was a fish that weighed 58 pounds and was recaptured by Captain Raudrick Nazario of San German, PR.  While completely speculative, doubling the weight of Nazario’s fish would put it close to the dolphin landed 9 years ago at TSL (i.e., ~116 pounds), but how

old would that fish be?  Given that, for most animals growth begins to slow with age, doubling the time at large for Narazio’s fish would equate to 3.05 years at liberty.  Narazio’s fish was tagged by Captain Bouncer Smith aboard his boat Bouncer’s Dusky in 2011 as a

20” peanut (i.e., approximately 5 months old).  Add the age at release to twice the time at large for Narazio’s fish and we arrive at a 3.43 year old fish at 116 pounds.  This would equate to a growth rate of 1.6 ounces or 45 grams per day for the life of that fish.  Growth obtained through the DRP’s tagging data suggest fish grow around ~45” or ~28 pounds (35 grams per day) in a year (unpublished).  Other studies suggest 50” or 40 pounds (49 grams per day) in a year.  To sustain that type of growth rate for 3 and a half years is almost inconceivable but, who knows maybe this species can pack on 100+ pounds in 3.5 years.  Point being, had this beast been properly documented with IGFA, we would know more about the age and growth of this species.  This is not the first time a likely hundred- pound dolphin went undocumented.  Just over 3 years ago, another potential century-mark dolphin was caught off Cabo San Lucas but was filleted before being properly documented with IGFA.  Because documentation is critical, we think it’s necessary to share the steps to properly document and submit a potential all-tackle world-record breaking mahi with IGFA in part I of this month’s article.

The International Game Fish Association is the world’s most widely recognized authority on the conservation of game fish and the promotion of responsible, ethical angling practices, through science, education, rule making, and record keeping.

The process for documenting a potential record-setting dolphin, or any other fish, needs to be done correctly.  Below is a basic list of steps to follow.

Documenting the most rare of individuals of any fish with IGFA does entail a thorough process, but we are grateful that this process exists to allow anglers the opportunity to advance society’s knowledge on the uniqueness of the rarest individuals in any given species.  We just still can’t believe that 87 pounds is still the all-tackle world record for

mahi!  But, with large 72- to 76- pound fish caught off the U.S. East Coast just last year (and last month), maybe it could happen this year. So, get your scales ready.  Examples of some acceptable weighing devices and scales which must be certified by authorized officials are shown to the right.  Part II of this article examines current state- and country- based dolphin records around the country and region (see table below) and we use recapture data to examine when it is likely state records could be challenged, and that is spring.  The table below will be updated periodically and expanded to contain more records for large dolphin in other key locations such as the Bahamas and Dominican Republic.   Click here to read a short article about U.S. East Coast return migrants and showcases the dedicated anglers and captains who tagged and released small dolphin and took precious time to report recoveries of large fish returning to the coast in spring.

Click here to check out all the line class, tippet, and junior world records for dolphinfish certified by IGFA.

The article above was segment 1 of this page.  More segments are currently being developed.  Visit our publications page to see reports and scientific manuscripts from data compiled throughout the history of the DRP.