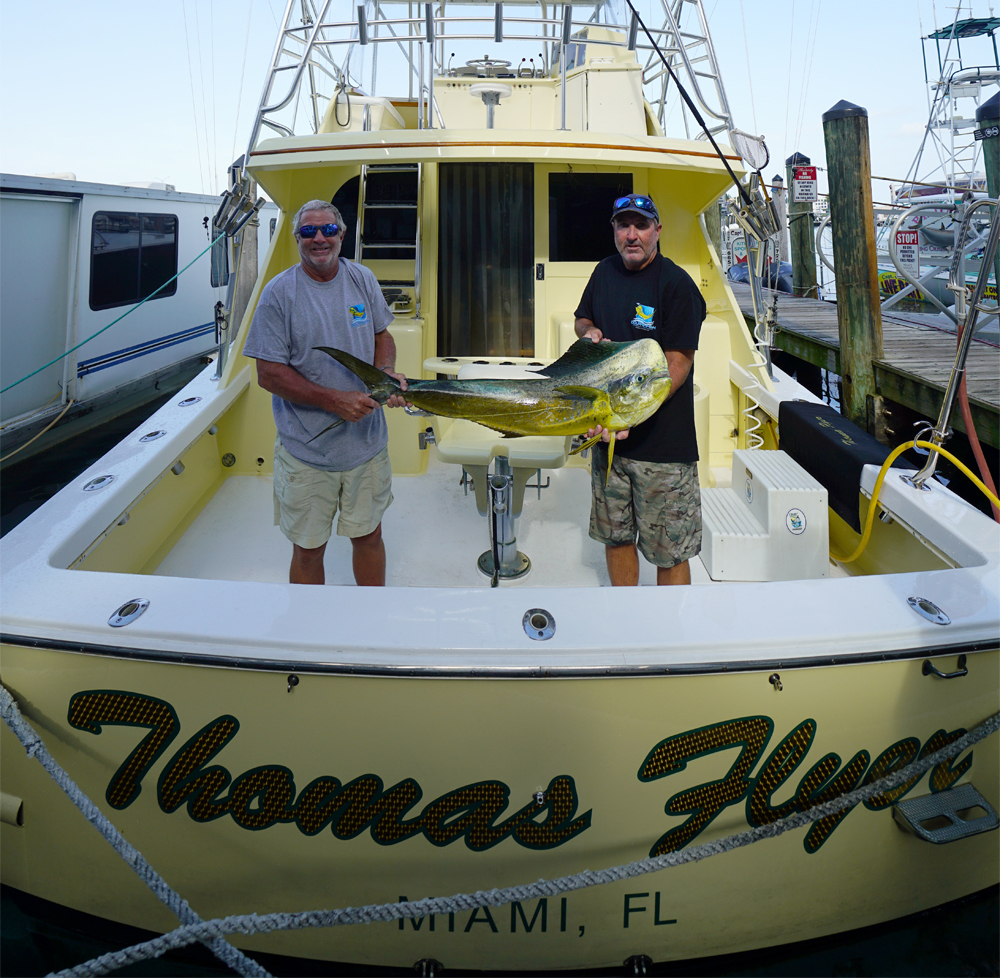 There are thousands of offshore fishing charters around the world and in the United States and many catch dolphin during their outings, but only one has tagged and released 3,000 in the name of conservation and science.  Working with the Dolphinfish Research Program since 2005, this summer, Captain’s Jimbo and Rick Thomas of the Thomas Flyer Fishing Charters achieved that impressive milestone.

For offshore anglers, the Dolphinfish Research Program (DRP) provides the best opportunity to understand a vitally important fishery crucial not only to countless anglers along the entire Eastern Seaboard but also to an incredibly wide range of blue water predators. The program has been remarkably successful in revealing new information on dolphin in the Atlantic Ocean, Caribbean Sea, Gulf of Mexico, and Eastern Tropical Pacific Ocean.

While the DRP has been extremely impactful in its 21 and a half years existence, it has only been so through the efforts of more than 1,800 privately owned vessels and more than 6,000 anglers, which has resulted in more than 30,891 tagged fish. Though every tagged fish is equally important, Captains Jimbo and Rick Thomas of the Miami-based Thomas Flyer Fishing Charters have tagged an extraordinary number of fish. The Thomas brothers have tagged and released at least one dolphin off the Florida Keys to central Florida as well as in the Bahamas in each of the last 17 years.

Since I began Thomas Flyer Fishing charters in Miami 41 years ago, we would catch larger dolphin more often than today and the dolphin season was generally longer in duration. This concerns me because dolphin is the most frequently caught species during our outings. So, we got involved in the Dolphinfish Research Program to help conserve and improve our understanding of the species for future generations. - Captain Jimbo Thomas

In terms of charter outings, the Thomas Flyer tagged and released at least one dolphin during 402 offshore trips.  They averaged 7 fish released per trip, which amasses to 3,000 releases. They have tagged more than 50 dolphin in one day on two different occasions, and on one outing in 2010, they tagged a staggering 82 dolphin. The Thomas Flyer averages 167 dolphin tagged each year and has tagged 300 or more fish in three separate years.  Their best year was 2007 when they tagged 342 fish, which is among the top ten highest for the DRP, and the highest by a fishing charter.  Overall, the Thomas Flyer is responsible for tagging and releasing 217 fish in the Bahamas, the highest of any vessel.  The average size fish they release is 18.35 inches, but 13.5 percent are larger than Florida’s legal limit, with some dolphin tagged and released as large as 30 inches.

Off Florida, 16 of their dolphin have been recovered, and 10 have been recovered off the Carolinas.  Their effort has also resulted in four recoveries in the Mid-Atlantic Bight and three in the tropical Atlantic off Cuba and the Dominican Republic.  Tagging and releasing dolphin has become a routine for Captains Jimbo and Rick Thomas, who also like to expose their clients to the process to collect scientific data on the species.  It is estimated that the Thomas Flyer has exposed at least a thousand of their clients to dolphinfish conservation and scientific data collection, among the highest of any vessel participating in the DRP.

My clients aboard the Thomas Flyer really seem to enjoy it because they know they are helping do their part for conservation and if we’ve got to let them go it’s not a big deal to put a tag in them, turn them loose, and hopefully they get recovered and we get some great data out of them.

Their tagging efforts have also revealed that some dolphin released off the Florida Keys will return to the Florida coast in less than six months. This important finding supports having a regulation that requires fish under 20 inches to be returned to the water. This suggests that Florida fishermen could realize benefits from this conservation measure in as little as six months with the opportunity of having more and larger fish to catch. This finding also demonstrates that East Coast anglers will benefit from reinvesting in the small dolphin they catch by releasing them in order to provide the fish the opportunity to return as gaffer-size dolphin.