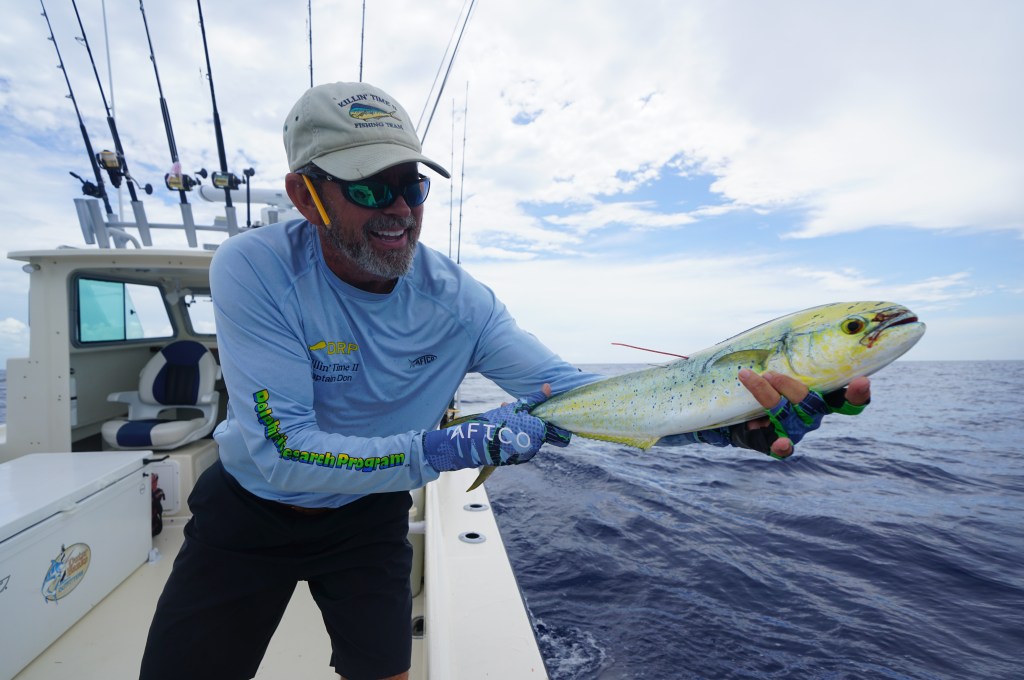 Below is the letter submitted to the SAFMC that details every outing for Killin’ Time II over the past 5 years.

When you set out from Cudjoe Key, FL, aboard Killin’ Time II with Don Gates, you are destined to tag and release a small dolphin.  Two weeks ago today, angler Chris Whitley did just that and witnessed Gates tag and release his 4000th dolphin!  He joined more than 70 other anglers who have helped him to surpass this incredible milestone since Gates started tagging for the DRP in 2002.  Since then, Gates, along with three of his closest fishing aficionados, Allen Lewis, Darryl Williams, and Rich Benton, have been responsible for the majority of tag deployments and 180 tag recoveries have been generated from their effort.  While documenting the movements and life history patterns of dolphin are their main goals, the Killin’ Time II fishing team prides itself on exposing new anglers to the proper methods to tag and release small dolphin, the fun involved in tagging, and the reasons to get involved in tagging.

“Since I began fishing for dolphin in the Keys in the 90s, we would catch larger dolphin more often than today. This concerns me because if there were not any dolphin, then I would not be an offshore fisherman. So, we got involved in the Dolphinfish Research Program to help conserve and improve our understanding of the species for future generations.”

Hence, in 2018, we documented Killin’ Time II surpass 3000 tagged dolphin (click here for that video) and produced a short how-to-tag dolphin video (click here to watch) with outings sponsored by the team.  In addition, over the past several years, the team has assisted in educational DRP seminars with the Scouts of America at Florida Sea Base and sponsored outings to deploy CCA FL STAR tags, thus providing further evidence of their dedication to the craft of tagging and conservation and research of dolphin.  As a result, Killin’ Time II’s dolphin data is a comprehensive offshore private recreational angler dataset that we examine it in detail below.

Killin’ Time II’s dolphin data collection revealed both local and regional short and long-distance movements throughout the WCA.  We arranged their data collection into ten separate sections based on specific attributes that relate to the recoveries and data this vessel generates.  Read more below.

Killin’ Time II’s cumulative fishing effort from June 2017 until June 2021 was broadly distributed south of Looe Key, FL.  A greater amount of time searching and fishing for dolphinfish as well as the actual number of dolphinfish tagged occurred in water from 100 to 500 feet deep.  With the dolphin tagging sites overlaid (red ovals), effort and tagging data can be used to examine the orientation, biomass, and length of sargassum habitat that this vessel may have been fishing at given any distance from the 30 meter reef contour.  Dolphin tagging sites are slightly offset due to the methods used to estimate fishing effort per .5 square mile.  Since 2016, the Dolphinfish Research Program has worked with over 50 vessels to collect fishing effort and catch data.  While there is value to examine cumulative patterns in these data, what is beyond the scope of this article is how this effort varies through space and time and how it relates to other factors such as sea surface temperature, chlorophyll a, or the position of the Gulf Stream, etc.  For these trips we have also logged the number of fish kept per trip for all major pelagic species (skipjack, blackfin, yellowfin, sailfish, blue marlin, wahoo, etc.).

How many schools of dolphin do you interact with during your offshore fishing season while bailing (casting to dolphinfish with live or cut bait from a drifting or slowly moving boat)?  Based off of this question, our decision as offshore anglers should be to minimize the incidence of negative interactions when encountering schools of dolphin while bailing by utilizing ethical angling methods such as the use of non-offset circle hooks and decreasing the use of drop-back methods that can result in fatal injuries to dolphin.  In ongoing research to educate anglers about the opportunity we all have to minimize negative interactions with dolphin while bailing, we examined the last three years of tagging data associated with the Killin’ Time II fishing team, a vessel in which we have also collected vessel tracking data for every offshore outing (n = 65) during that time period.  Over that time period, this fishing team tagged 3 or more fish in 98 separate schools while bailing.  To the left is the frequency of size in terms of fork length (FL: inches) for all of those schools.  Visually, you can see from the plot that it appears that the size composition of most of the schools encountered were fish less than 20” FL (white dashed line).  Numerically, 38.7% of the schools had a size composition per school less than 20” fork-length but 53.9% of all individuals
encountered across schools were less than 20” FL.  On average, 4 size classes were present per school with a range from 1 to 8 size classes per school.  What this means, if you assume your fishing style is similar to the Killin’ Time II fishing team i.e., you start to fish when you see birds, something floating, or travel along a weedline, the likelihood is higher that you will encounter small dolphin so you should be prepared with an arsenal of tools e.g., non-offset circle hooks or non-offset circle hook jigs, a dipnet or sling, a towel and gloves, and an ethical angling  mentality to ensure the smallest individuals you encounter are caught and released with the least amount of injuries.  In doing so, you can also safely and effectively land the size classes that you prefer to bring home for table fare and release the size classes that you would like to continue to grow and spawn and contribute to a healthier dolphin fishery.

While aboard Killin’ Time II, the general rule is to keep dolphin larger than 24″ and tag and release fish smaller in size.  Although, the team has tagged and released 135 dolphin greater than or equal to 24″ fork-length over the years.  In 2017, we incorporated fishing method into the data collection process and since then their data show that only 22% of the dolphin they caught were caught trolling with j-hooks leaving the vast majority of fish hooked up on circle hooks.  The terminal tackle of choice are 5/0 circle hooks for live or cut bait or non-offset circle hook jigs (click here for an example) to ensure dolphin are hooked in the jaw or lip.  In fact, of the last 805 dolphin tagged, when terminal tackle was incorporated into the tag and release data collection, 93% of the dolphin hooked were hooked in the jaw allowing the team to execute a clean tag and release.   Working with Gates and the Killin’ Time II fishing team has allowed our program to push the envelope on data collection on fishing method, hooking location, and post-release swimming behavior which are necessary data to estimate discard mortality in recreational hook and line fisheries (see article to the right).  Since this article was published in 2019, all boats that tag in the DRP are requested to submit these data.  One of the goals would be to gather enough data across all tagging zones to estimate a regional discard mortality rate for dolphin in recreational fisheries in the Western Central Atlantic Ocean and Caribbean Sea.

Of the past 1,326 dolphin tagged and 143 dolphin kept, Killin’ Time II caught, tagged, and released 5 pompano dolphin (Coryphaena equiselis).   Based on this catch frequency, it is an unusual observation and worthy of including a note in this section.  We have heard that pompano are more prevalent in areas around the Azores and eastern Atlantic but little is known regarding the species movement ecology and behavior.  Pompano can be distinguished from common dolphin due to the lack of a pointed anal fin, a deeper but narrowly forked caudal tail, and a square (not oval) tongue tooth patch.  In addition to providing occasional observations on the occurrence of pompano in the Florida Straits, the Killin’ Time II team have also sent in photos of bizarre scars they found associated with some individuals they have caught and tagged.  For example, the image in the lower left shows a dolphin that is missing the majority of it’s caudal tail yet it was still able to hit a bait.  Lastly, on occasion, loggerhead sea turtles and silky sharks have been observed with dolphin while fishing aboard Killin’ Time II providing unique observations to note that relate to pelagic food webs and species-species interactions.

STRAIGHT-LINE (A.) CONVENTIONAL MARK AND RECAPTURE AND SATELLITE TAG MOVEMENTS (STRAIGHT-LINE (THICK BLACK ARROW) AND GEOLOCATION TRACK) GENERATED FROM THE INVOLVEMENT OF VOLUNTEER ANGLERS IN THE DOLPHINFISH RESEARCH PROGRAM FROM 2002 TO 2017. SATELLITE TAG MOVEMENTS WERE OBTAINED ALONG THE U.S. EAST COAST, IN THE TROPICAL ATLANTIC (NORTH OF PUERTO RICO), AND CARIBBEAN SEA (SOUTH OF PUERTO RICO). PANELS SHOW STRAIGHT-LINE CONVENTIONAL MARK AND RECAPTURE MOVEMENTS WITH BATHYMETRIC REFERENCE FOR (B.) FLORIDA, (C.) FLORIDA TO THE SOUTH ATLANTIC BIGHT, (D.) FLORIDA TO NORTH CAROLINA, (E.) FLORIDA TO THE MID-ATLANTIC BIGHT (MAB), (F.) SOUTH CAROLINA, (G). SOUTH CAROLINA TO NORTH CAROLINA, (H.) SOUTH CAROLINA TO THE MAB, (I.) U.S. EAST COAST TO INTERNATIONAL LOCATIONS, (J.) THE BAHAMAS, (K.) THE BAHAMAS TOWARD THE U.S. EAST COAST AND NORTH ATLANTIC, (L.) U.S. EAST COAST TO THE BAHAMAS, AND (M). U.S. CARIBBEAN SEA TOWARD THE DOMINICAN REPUBLIC.

Killin’ Time II’s tagging effort is responsible for showing drastic changes in growth of dolphin in a relatively short amount of time.  In the figure to the left, both of the dolphinfish recoveries in the Bahamas were tagged by Killin’ Time II and both 18″ fish grew 30 to 33″ fork-length in 304, and 309 days, respectively.  These examples when examined as a weekly growth rate equate to .69 and .74″/week.  The recaptured fish ranged in size from 48″ to 51″ fork-length and likely weighed more than forty-five pounds.

While conducting field work aboard Killin’ Time II, we have accumulated hours of in water observations and footage.  These experiences have led to documenting the speed at which a tagged fish will resume schooling with a school of dolphin (within minutes), and the co-occurrence with large sea turtles and sharks.  We have also extensively documented how dolphin meander around floating objects such as wooden pallets and sargassum mats and set the stage for how small dolphin can be studied independent of fishing activity.